If multidisciplinarity is key then Gabriel Böhmer would be the keymaster.
Director, illustrator, painter, writer, musician, monty python buff… you name it.

He’s also apparently a mind reader since he perfectly encapsulated what we all miss the most:
«The darkened cinema. That strange intimacy. Going home happy, full of colours and ideas». His mesmerising animated short film “The flood is coming” was part of our Supernature focus in 2019 since Yorgos would not stop fanboying about it.

We interviewed him on occasion of Shortcut n. 5 and, to no one’s surprise, his selection was nothing short of sublime: from the heartrending Hedgehog in the Fog that made Vanessa turn on the waterworks, to deep short film lore with Hans Richter’s Rhythmus 21 that turns 100 this year.

Enjoy this selection! Meanwhile we’ll listen to Music with Ber at the counter of a Scottish Pub. 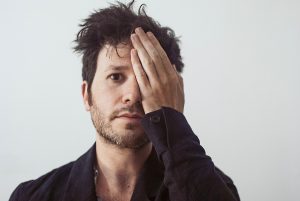 Originally from Zurich, Gabriel Böhmer is a London based artist interested in memory and dreams. His pieces draw on fleeting thoughts to build a narrative of the subconscious. Using minimal imagery and writing his work is often humorous, sometimes tragic, and always approaching the absurd.

1 – If you would have to present yourself with solely one of your films, which one would you choose.

I think it most closely captures my inner rhythms and thinking. I also let myself be a little silly here and there. And I think we could all use a bit of silliness right now.

2 – 2 – A short film you would put in a time capsule for future generations to watch.

The world is cutting faster and faster. I hope we can remember to let thoughts slowly meander once in a while. This is the perfect short for that. It’s so simple, it takes its time, and is utterly lovely. It also features Gustav Mahler’s ‘I Have Lost Touch With The World.’ Somehow seems fitting for someone in their mid 30s making recommendations.

The animation and story are wonderful. But there is a mysterious darkness too. The darkness is necessary. I feel like so much love must’ve been put into it. This one always puts a smile on my face.

–Street of Crocodiles by The Quay Brothers – 1986

Beautiful. Terrifying. A ballet of absurd gorgeousness and the grotesque. With a score by Lech Jankowski that’s so soulful it makes the inanimate have a rich and tortured history. As though Lewis Carroll himself was having a fever dream.

There are no moving images in it. Nothing ever whirrs by at 24 frames per second. It’s just a series of still frames, and a fascinating story. It’s a great explanation of the freedom and possibilities of short film.

Can we call this a short film? We’ll have to, I’m afraid! I saw it at the end of a long festival day. It was the last film in the section and I was getting a bit sleepy. There’s a part where Mekas walks his dog on the frozen Walden pond. I was overcome with nostalgia, as this reminded me of walking my own dog on Walden… Then I remembered: I’ve never had a dog! This simple poetic diary had me hypnotised to the point that I unwittingly placed myself into it.

In the mood for experimentalism?! Rhytmus 21 by Hans Richter does it for me every time. I think this little film is beautiful and engaging. It seems like a perfect fit on the topic of love.

8 – What do you miss more about going to film festivals?

I miss a lot. The quiet train journeys to places where I don’t understand the words, or the landscape. Studying my key phrases, “Where is the hospital?” “Can I have a coffee?” “My hovercraft is full of eels.” And then the contrast of the rush of the festival. Suddenly being surrounded by people. Too many people! The dialogue. Spending intense hours with strangers. Being inspired. Feeling like you’ve known them forever even though it’s only been a couple of hours of this unusual shared experience. The darkened cinema. That strange intimacy. Going home happy, full of colours and ideas.